White Wing: the Grandam of them all… 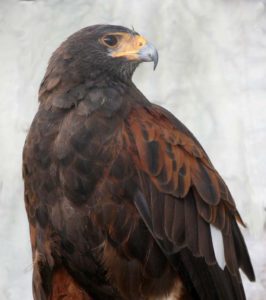 Of all the hawks currently registered in Baywing Database, White Wing probably has the most descendants. As of October 2018, 1,068 of White Wing’s descendants are registered in Baywing Database, accounting for 49.5% of the 2,158 registered hawks. These include 153 offspring, 400 grand-children, 169 great-grandchildren, and 284 great-great-grandchildren and 62 great-great-great grandchildren. A passage bird of Texas origin, White Wing was Tom Coulson’s best Harris’s Hawk in the 1980s. She and another female provided Tom with one of his best falconry days of that era, when these two hawks caught 14 swamp rabbits and a rail. White Wing was also an accomplished duck hawk, taking Wood Duck, Gadwall and Blue-winged Teal. The white wing feather was the result of an injury from a tangle with a feral cat. She was the first hawk that Tom and Jennifer chose to begin their selective breeding project. She had two mates in her long life: from 1986 through 1989 she was paired with MalcolmME, and from 1990 through 2002 she was paired with Niel’s Male. Her famous offspring include:

by Toby Bradshaw, Creator of the Baywing Database

Of the 37 Harris’s hawks I flew between 1982 and 2019, Vici is the top-performing jackrabbit hawk. In 2010 I had the privilege of flying Vici with her sister, Una, and mother, Shadow. These 3 powerhouses have killed more than 500 jackrabbits each, and together account for half of all the jackrabbits my Harris’s hawks have caught since 1982! The 2010 hawking season was an unparalleled opportunity to compare, head-to-head in casts/groups, my 3 greatest jack hawks. After 49 straight mornings plying the sagebrush sea of the Great Basin, Vici had caught 114 jacks, edging out Shadow (105) and Una (87). But numbers don’t tell the whole story – Vici’s greatness comes from her style and intensity on quarry. She has perfected a climbing pursuit that ends with a dramatic – and brutally effective – stoop. A surprisingly large proportion of her jacks are killed on impact. Jennifer Coulson captured Vici in action in Wyoming; note the height of the stoop even though the ground is flat.

For more details on Vici’s pedigree and accomplishments, read The making of a jack hawk.

Vici is paired with her first cousin, Xenon (out of Isis and Zippy). Xenon is the top-ranked male Harris’s hawk on jackrabbits (288) in BaywingDB. I am flying 2 of Vici’s and Xenon’s daughters now, Blitzen and Comet.